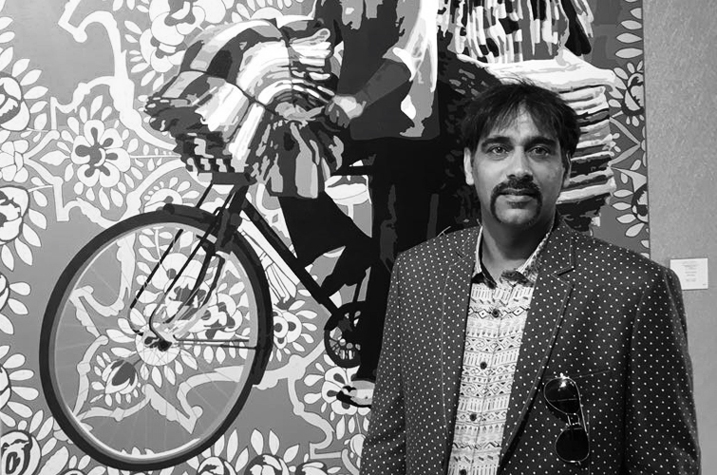 Sohan Jakhar, an enthusiast young artist, representative of true Indian spirit with globalization through his work of art. He was born in Sikar (1978), Rajasthan and now working in Jaipur. Meanwhile he has done his Master degree in painting from Rajasthan School of Art, Jaipur and Diploma in Advance Computer Art from Bangalore.

He uses his skill to address his personal relationship with the cities as well as the ones he has with ancestry. The decorative motifs floating in the background come from the painted fresco on the Havelis (Mansion) of Sekhawati, a hometown of the artist, where he has spent his childhood. Along with this impression of motherland, the impact of latest technology can be seen in his paintings, as he has a good command on the computer art software’s. He uses his technical skill to explore his paintings. Sohan’s current body of work examines the visual dynamics of the roadside bazaar.

According to Sohan Street Bazaar’s are surrounded by visual stimulation, noisy visual chaos of vendors, hawkers. These vendors, hawkers dominate busiest urban landscapes. Here, a whole new world of images, sounds and gestures is evolving and gaining ground. Visuals of roadside stalls anticipate and announce the cultural and technological shifts.

These street vendors offer a critical viewing of the strategic role of popular Indian imagery from the bazaar “not as an object to be seen or a text to be read, but as a process wherein social and subjective identities are formed, bringing in of a new trajectory, while retaining its cultural traditions.

Sohan says that these roadside stalls dramatise changing personal and social values alongside forging ideological conceptions of the nation itself. . The visuals of these stalls grew out of major cultural and technological transformations that occurred in the last decade, which included the impact of the consumerism.

These vendors seem to reflect a scenario in permanent state of transition and moving life. His works aesthetic delineates the complex inter –relations of India’s urban & semi urban scenario.